Essential Clove oil made from Cloves coming originally from the Maluku islands called the  Spice Islands. Cloves refers to the flower buds that are used in dried form.

Already in the early Middle Ages, the cloves came to Europe.

The cloves are now grown worldwide. The best quality, however,is still from the Malukus, Zanzibar, and Madagascar.Cloves and essential clove oil were already in antiquity a valuable remedy. The spice, which belonged together with pepper, nutmeg and cinnamon to the exotic spices, was soon used for its anti-inflammatory and antiseptic properties as a disinfectant.

Essential Clove oil has therefore been used by epidemics. Essential Clove oil has been used not only to relieve the inflammation of mucous membranes but also for the treatment of abraded skin, festering sores and warts. While essential clove oil was used in the past against mental fatigue, poor concentration and bloating, its field of application of clove oil today focuses on toothache and inflammation of the oral pharynx. It has also made a name as an anti-mosquito scent. 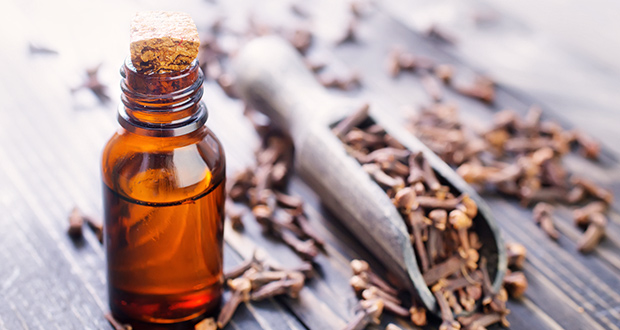 Clove, the aromatic and exotic spice, has a long history of medicinal use going back many centuries into early human history. Clove was highly regarded by the German abbess Hildegard von Bingen (1098-1179) for its medicinal properties. Clove is also well known in the traditional medicine of India and China.

Clove comes from clove trees (Syzygium aromaticum) which grow in tropical regions. Oil of Cloves (also known as clove oil or clove essential oil) is steam distilled from flower buds and stems. Clove has several interesting properties, due mainly to its high content of a phytochemical known as eugenol. Clove oil consists of about 75-85% eugenol. Eugenol is creating interest in both conventional and alternative medicine because of its ability to effectively stop cancer cells.

Clove has been used for centuries for numbing pain, repelling internal parasites, arthritis, and rheumatism, and for treating throat, sinus, and lung infections.Clove is a natural anti coagulant (see warning at end of article), with anti-fungal, antioxidant, anti-bacterial, anti tumoral, anti-viral, and anti-inflammatory properties. All the important anti’s!

An excellent illustration of clove’s anti-viral capabilities occurred in Indonesia in the mid 17th century. The people of Indonesia’s islands of Ternate and Tidore (historically called the Spice Islands) used clove extensively throughout their history for wellness. During the mid-1600’s the Dutch East India Company controlled the spice trade in the Spice Islands and gained complete control of the clove trees in this area. Any clove trees discovered that didn’t belong to the Dutch East India Company were destroyed, thus allowing them to have a complete monopoly of this and other spices. As a consequence, the Islanders who relied on those clove trees died from the epidemics that raged through the region, brought to them courtesy of the same Dutch colonists. Such is the power of clove to protect us.

Oil of Cloves, Eugenol, and Cancer

The most exciting and promising research on clove essential oil relates to its anti-cancer benefits. Most of the researchers who study clove essential oil for any length of time agree it has great promise − not only for its ability to kill cancer cells but as a natural chemopreventive (cancer prevention) agent.

Clove essential oil has been found to have cytotoxic (cancer cell killing) properties against a line of breast cancer cells known as MCF-7.